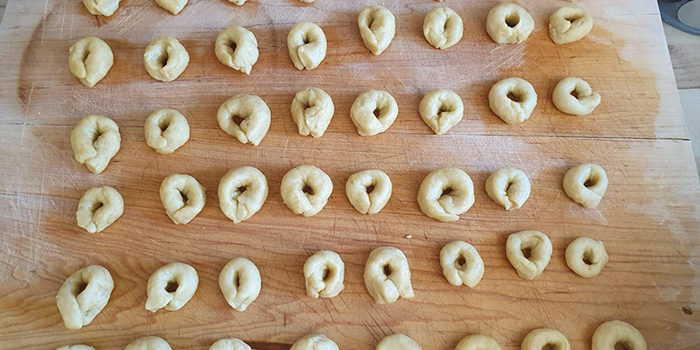 Who invented taralli and where they come from? The origin of the word taralli is still uncertain and open to interpretation. Some people believe it is derived from the Latin word “torrère”, to toast, while others think it comes from the Greek word “daratos” which means similar to bread. While its origin is still uncertain, we know that taralli became hugely popular in the south of Italy back in 1400, in a period when famine was raging in the region.

According to the legend, the first tarallo was kneaded by a mother who, having no food to feed her children with, came up with the recipe by randomly mixing together what she had in his pantry: flour, olive oil, salt, white wine. All essential products in Apulian cuisine.

For this reason, in a difficult moment like the one that Italy and the world is facing, returning to our origins, tradition and simplicity becomes a duty more than a choice.

Sneak into your kitchen, roll up your sleeves and master your italian cooking skills by making some taralli. And remember, you can make them in whatever shape you like!

We use cookies on our website to give you the most relevant experience by remembering your preferences and repeat visits. By clicking “Accept”, you consent to the use of ALL the cookies.
Cookie settingsACCEPT
Manage consent

This website uses cookies to improve your experience while you navigate through the website. Out of these, the cookies that are categorized as necessary are stored on your browser as they are essential for the working of basic functionalities of the website. We also use third-party cookies that help us analyze and understand how you use this website. These cookies will be stored in your browser only with your consent. You also have the option to opt-out of these cookies. But opting out of some of these cookies may affect your browsing experience.
Necessary Always Enabled
Necessary cookies are absolutely essential for the website to function properly. These cookies ensure basic functionalities and security features of the website, anonymously.
Functional
Functional cookies help to perform certain functionalities like sharing the content of the website on social media platforms, collect feedbacks, and other third-party features.
Performance
Performance cookies are used to understand and analyze the key performance indexes of the website which helps in delivering a better user experience for the visitors.
Analytics
Analytical cookies are used to understand how visitors interact with the website. These cookies help provide information on metrics the number of visitors, bounce rate, traffic source, etc.
Advertisement
Advertisement cookies are used to provide visitors with relevant ads and marketing campaigns. These cookies track visitors across websites and collect information to provide customized ads.
Others
Other uncategorized cookies are those that are being analyzed and have not been classified into a category as yet.
SAVE & ACCEPT